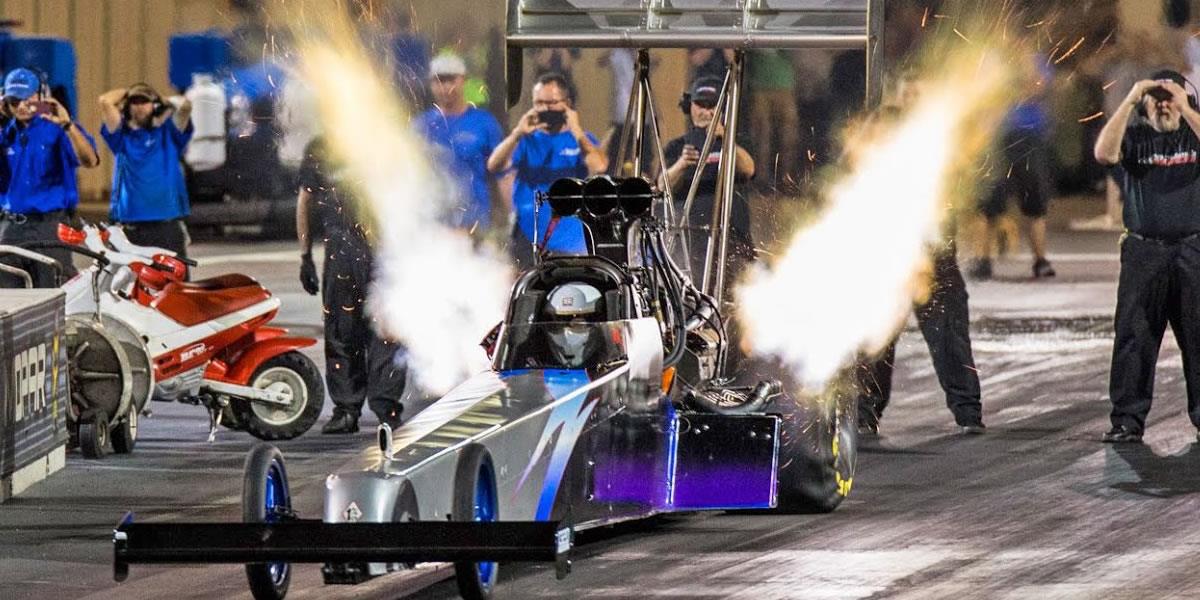 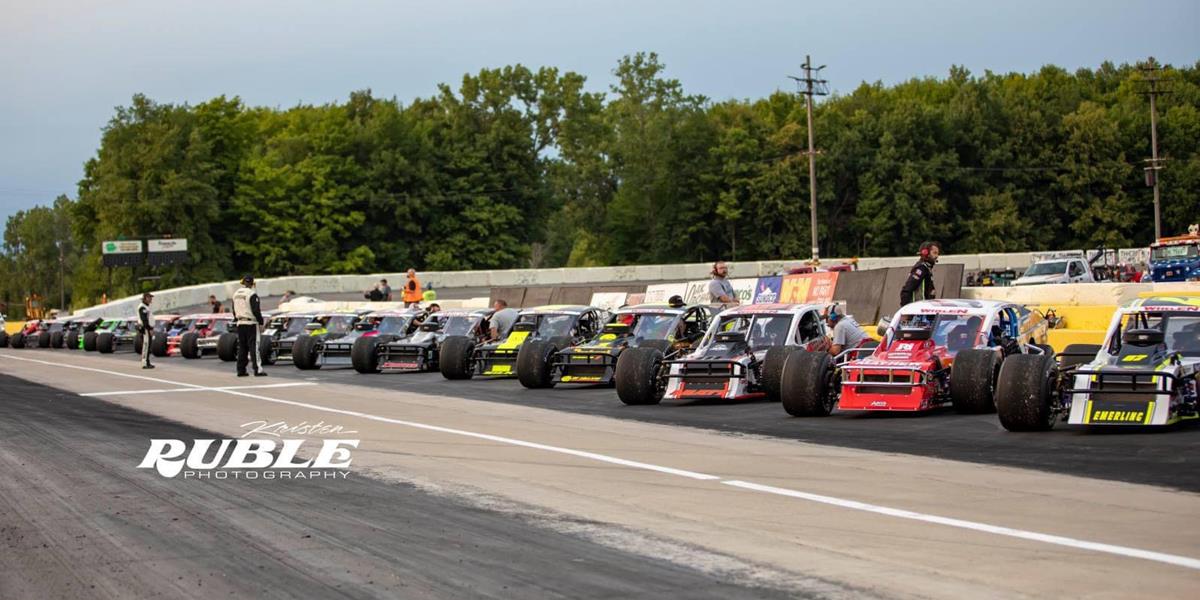 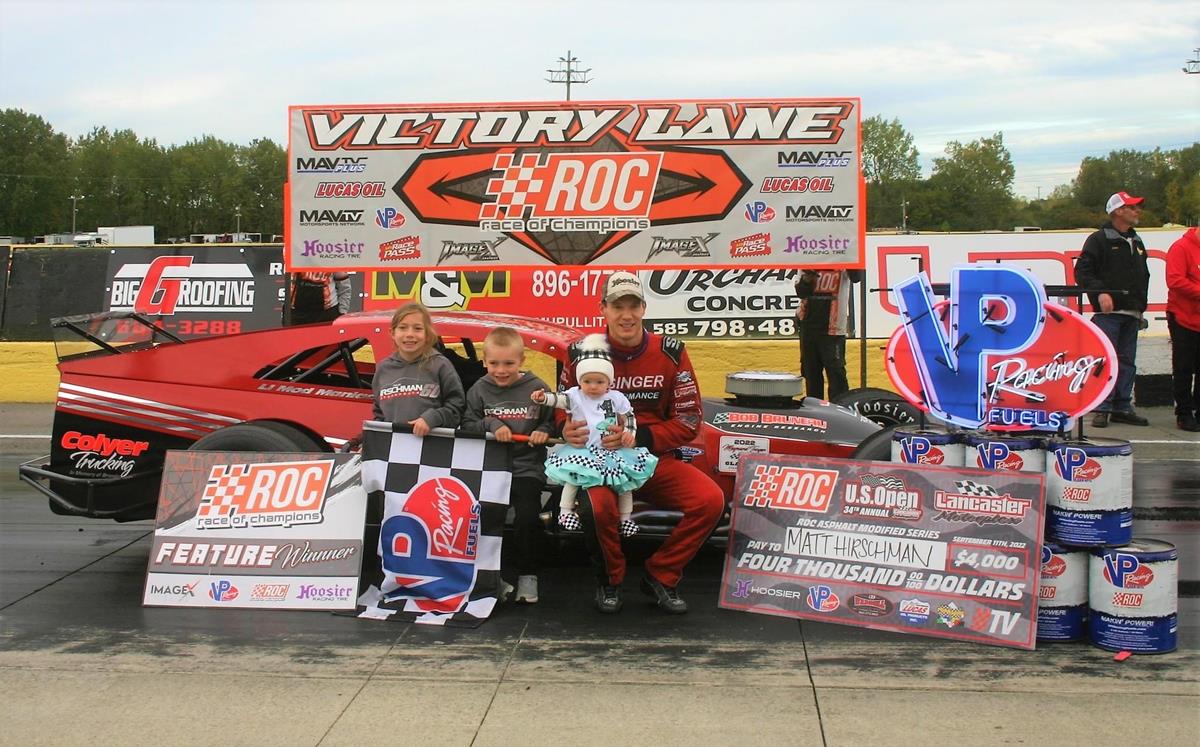 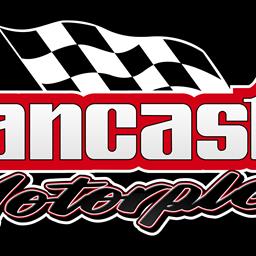 LANCASTER, NY (October 1, 2022) … “Big Money” Matt Hirschman from Northampton, PA won the 34th edition of the US Open at Lancaster Motorplex on Saturday afternoon. For Hirschman, it was his sixth career triumph in the race, and 12th Lancaster Modified victory. Eldon King III from Freedom, NY won the Late Model feature for his second straight US Open victory. Mark Hoch from West Seneca, NY won the Frank Batista Sr 37 for the Street Stocks for his fourth Lancaster win of the season. Dave Milbrand won the Open 4 Cylinder event on the big track.

2021 Series champion Austin Beers and 2022 Lancaster Motorplex Sportsman track champion George Skora III brought the Race of Champions Modified Series to the green flag for the 34th running of the US Open with Beers in the lead, with Jack Ely, Matt Hirschman, Skora, and Daren Scherer racing in the top five early on. Andy Jankowiak battled with Jake Lutz to take over sixth place on lap eight, just as Hirschman passed Ely to move into second place. “Big Money” would look for the lead and would take it away from Beers on lap 14. Jankowiak would continue to work his way into the top five on lap 16, after passing Daren Scherer. George Skora III would move back into third place after passing Jack Ely on lap 23, with Jankowiak, and Zane Zeiner racing in the top six. Jankowiak would battle with Jack Ely for fourth place on lap 32, and the two would battle for several laps. At the race’s halfway mark, Matt Hirschman would continue to lead Austin Beers, Skora, Ely, Jankowiak, Zeiner, Patrick Emerling, Tony Hanbury, Mike Leaty, and Daren Scherer. Andy Jankowiak would move into fourth, with Zeiner taking over fifth place on lap 45, as Ely got freight trained on the outside of the speedway. With 25 laps remaining, Hirschman continued to show the way ahead of Beers and Skora. The lead trio would pull away from Jankowiak, Zeiner, Emerling, and Hanbury. Patrick Emerling tried to get around Zane Zeiner to enter the top five on lap 59. Emerling started 14th on the grid of the 21-car field. The leaders would hit lap traffic on lap 61, just as Emerling passed Jankowiak to take over fourth place. Emerling would continue his hard charge to the front, as he passed Skora going into turn three to take over third place on lap 66. Emerling would then catch Austin Beers for second place with six laps remaining. Andy Jankowiak and Tony Hanbury got together on lap 70 in turn two to bring out the race’s first caution. The late-race restart would see Hirschman take off in the lead as Emerling applied pressure to Beers for second place. Mark Tychoniewicz spun going down the back straightaway to bring out the caution with three laps remaining. Hirschman would continue to lead off the lap 72 restart, and Emerling would take over second on lap 73. Hirschman would hold off Emerling, Beers, Skora, and Zeiner to win his sixth US Open, and first since 2018.

The Frank Batista Sr 37 for the Street Stocks was led to the green flag by Chris Powers and Dylan Carbone, with Dylan Carbone showing the way. Jacob Gustafson would take second away on lap two. Carbone would slow down the back straightaway to bring out the caution on lap four. On the restart, Jacob Gustafson would take the lead with Mark Hoch racing in second. Hoch would take the lead away on lap eight. Mike Dalfonso Jr would take over third place from Frank Batista Jr on lap 10, just as Gustafson reeled in Hoch for the lead. Dalfonso would take over second on lap 19, as Hoch started to pull away. Tim Welshans would take second away from Dalfonso, just prior to a lap 24 caution for John Carlson who came to a stop in turn three. Hoch and Tim Welshans would battle for the lead following the restart, with Hoch edging into the lead. Hoch would go on to score the win, his fourth of the season and first US Open triumph.

Sam Fullone and Danny Knoll Jr brought the Late Models to the green flag with Fullone showing the way. Nick Ross would take second away, with Jeff Brown moving into third place, ahead of Knoll, with Joe Mancuso racing in fifth. Eldon King III worked his way into the top five on lap 10, challenging Brown for third and Ross for second place. Jeff Brown spun, in turn two to bring out the caution on lap 16. On the restart, King would continue to drive up through the field and by lap 20, King would take over the lead. King would go on to score the win, his second straight US Open victory.

4 Cylinders raced on the big track, with Bob Palmer and Chris Deyoe Jr bringing the field to the green flag. Palmer would lead the opening circuit ahead of Dave Milbrand, Greg Urban, Deyoe, and Nick Galusha. Milbrand would take the lead on lap four, after Greg Urban led on lap number three. Andy Lewis Jr would take the runner-up position away from Urban on lap seven and would start to go after race leader Milbrand. Lewis would take the lead away on lap nine. The race’s first caution would come out on lap nine, as Megan Schoeles spun in turn two. On the restart, Lewis and Milbrand would pull away from the balance of the field. Milbrand would take over the lead on lap 17, while encountering lap traffic. Milbrand would hold off Lewis and Urban to score the win. Special thanks to Biggs Auto Recovery for sponsoring the 4 Cylinder open race on the big track.

Lancaster Motorplex management and ownership would like to thank all the drivers, crews, officials, marketing partners, and most important, the fans for supporting the track in 2022. Look for information regarding the end of the season awards banquet that will be released in the coming weeks.